Gage Animal Hospital (GAH), one of the oldest continuously operating veterinary hospitals in the State of Kansas, was established in 1950 by J. Alan Bradbury, D.V.M. A graduate of the College of Veterinary Medicine at Kansas State University in 1944, Dr. Bradbury, “Brad,” entered the Army Veterinary Corp where he served in the European Theater during World War II.

After the war he returned to the Midwest and briefly practiced in Kansas City where he met and married the love of his life, Rosie. Desiring to establish his own small animal practice, where excellent quality veterinary care could be offered to small animals in a caring community, he and Rosie moved to Topeka and established GAH at 1133 Gage Boulevard in 1950.

Upon graduation from the College of Veterinary Medicine at Kansas State University in 1977, Dr. Robert Shipman began working at GAH alongside Dr. Bradbury. In 1986, Dr. Shipman became Medical Director and owner of GAH.

In 1994, GAH relocated to 4000 SW 12th Street, one block west of Gage Boulevard in Topeka, Kansas, where it remains today. Designated a National Heritage Practice by the American Veterinary Historical Society, GAH continues the same tradition of excellence established by Dr. Bradbury seventy years ago, while embracing the future of veterinary medicine by continuously adopting the newest advances in veterinary medicine. 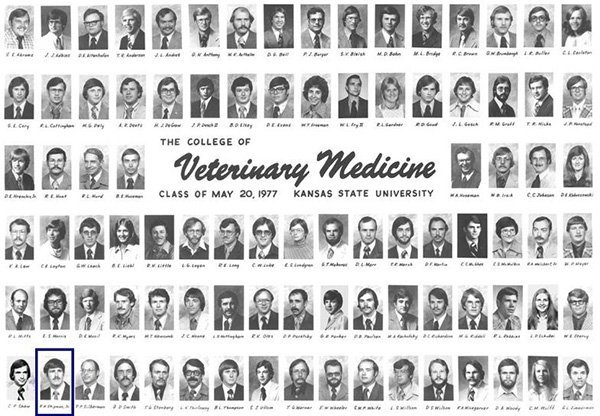 © 2022 Gage Animal Hospital. Designed & Managed by ViziSites. Terms of Use.

We use cookies on our website to give you the most relevant experience by remembering your preferences and repeat visits. By clicking “Accept All”, you consent to the use of ALL the cookies. However, you may visit "Cookie Settings" to provide a controlled consent.
Cookie SettingsAccept All
Manage consent

This website uses cookies to improve your experience while you navigate through the website. Out of these, the cookies that are categorized as necessary are stored on your browser as they are essential for the working of basic functionalities of the website. We also use third-party cookies that help us analyze and understand how you use this website. These cookies will be stored in your browser only with your consent. You also have the option to opt-out of these cookies. But opting out of some of these cookies may affect your browsing experience.
Necessary Always Enabled
Necessary cookies are absolutely essential for the website to function properly. This category only includes cookies that ensures basic functionalities and security features of the website. These cookies do not store any personal information.
Non-necessary
Any cookies that may not be particularly necessary for the website to function and is used specifically to collect user personal data via analytics, ads, other embedded contents are termed as non-necessary cookies. It is mandatory to procure user consent prior to running these cookies on your website.
SAVE & ACCEPT